Happy May dancers!  I am feeling mentally rejuvenated after a full day of American Smooth workshops at Emerald Ball. Physically…that’s another story, but first I wanted to share my insights and takeaways from the day.

There were six classes total, three before and three after lunch. 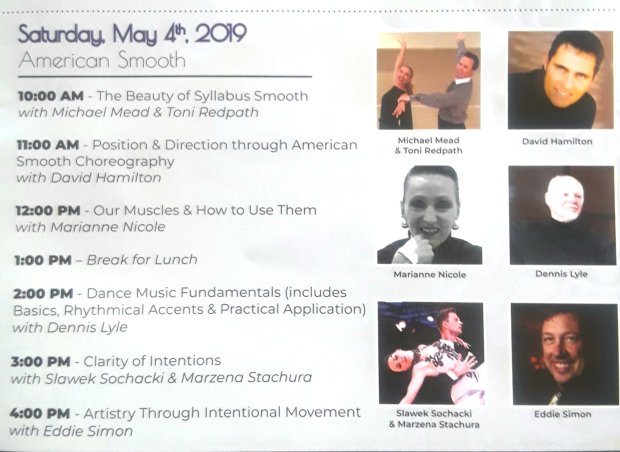 First up were the wonderful Toni Redpath and Michael Mead. I’m lucky that they are local to Southern California, so I’ve been able to attend several of their workshops. They like to discuss posture, frame and movement, in that order, and they describe things on a scale of 1-10 with 5 being where you start and where you should recover to. I appreciated their focus on the beauty of syllabus because I agree with Toni’s assertion that you should know your basic syllabus technique in order to “earn the right” to move up into the flashier Open level.

We didn’t do a whole lot of actual dancing, and unfortunately, just standing around aggravates my knees more than movement. By the time, David Hamilton was up, my knees were already talking. His lecture focused on maintaining connection to the common center when dancing. In order to do that, he emphasized the importance of maintaining connection within your own body. How many times have you been told to do something with your core? It might sound like a broken record, but it’s amazing what a difference having that internal engagement and connection makes. Another tidbit that caught my ear was a repeat of what Toni and Michael were talking about, except instead of saying you need to be able to recover to “5”, David said it’s important to not neglect the vertical position. This was one of the common themes of the day, and I have to wonder if there is some frustration among the higher level coaches that as Open Smooth gets flashier with more dips and tricks, the basic technique is being lost or ignored.

I ended up sitting down for part of David’s class and propping my knees up on my dance bag to give them a little elevation. I did the same for part of the next class taught by Marianne Nicole. I had the opportunity to get one-on-one coaching from her a couple years ago, and she has a special place in my heart because when she saw my tattoo during the lesson and I showed her how it covered my entire back, she looked at Teacher and said “and what are you doing about this?” I just loved her bluntness. Teacher assured her that he warned me about the potential consequences of showing my tattoo and I assured her that I wasn’t bothered because it made me happy. Then we went back to working on Tango.

Marianne’s class built on the previous two in that she covered basic posture and movement but on simpler terms. She’s a no-nonsense kind of woman and likes to keep things simple. No need to use fancy dance technique terms. Want good posture? Lift your xiphoid process (the little bit of cartilage at the very bottom end of your sternum, nicknamed Floyd) and project your sternum (nicknamed Vernon) forward and/or up (depending on the movement). Need to stop coming out of a turn? Squeeze your glutes. Marianne’s point was there are very simple actions that turn into the technique that we’re taught and it’s easier to understand the technique if you understand these actions.

We had an hour break for lunch, which worked for me because I was already sitting. The first class after lunch was the most exciting for me, partly because I hadn’t heard anyone really delve into this aspect of ballroom before! Dennis Lyle, who has been in the industry for decades, wanted to talk to us about music. In his blunt, sarcastic way, he explained that when we think we’re dancing to the music, we’re actually just dancing to the beat or count. I loved his metaphor of a seven-layer dip. He hears a piece of music and it’s like diving into every layer of deliciousness. We hear a piece of music and it’s like we’re just picking the olives off the top. One of the main challenges is we learn to dance with our feet first. We count 1, 2, 3 and our feet move 1, 2, 3. We don’t incorporate any of the rhythmical accents in the music.

Dennis did some demonstrations of Rumba and Foxtrot where he danced to the beat with his feet and then danced to the rhythm with his entire body. What a difference! He was always on time, but when he danced with his whole body instead of just focusing on the count with his feet, the movement became so much fuller and corresponded with the music so much more clearly. Another concept he brought up that I want to try to apply in my solo practice is when he’s thinking about dancing a particular step, he doesn’t think about how much time he has to move his feet from one place to another, he thinks about how much time he has to get his body from the starting position to the end. I geek out a little bit on this stuff. I love learning a new perspective on something and being shown details that I missed before.

Marzena Stachura and Slawek Sochacki were up next. These two own the studio where I train, and I’ve attended almost every one of the Smooth dance camps that they’ve held. So most of what they talked about was review for me, but it never hurts to review! They had prepared a mini routine for the class, so I got up to do some dancing. At this point, my knees weren’t happy but at the same time, I don’t think they minded getting to move instead of just stand. I did need to sit down about halfway through. The importance of the vertical came up again during their discussion about being clear about your intended movement. I have to admit, my biggest downfall on the dance floor is my doubt. If I question what I’m doing, everyone watching does too. That’s something my solo practice has had a huge impact on – helping me trade that doubt for confidence in my ability to dance on my own and dance even better with my partner. The solo practice forces me to clearly decide what my intentions are with each movement.

I sat through the entirety of the final class, but it was interesting nonetheless. Eddie Simon was continuing the theme of intentional movement, with a focus on artistry. I was a little bummed I was missing out on the exercises he had people go through. He had everyone pair up and with a few simple Tango walks around each other, he had them experiment with different physical intentions like changing the distance between the two dancers, the body angle or position to each other, the shape of the body and gestures. It’s obvious when you see two people facing each other and then one turns their back to the other. The message is completely different, even before they begin moving. The point was you can have the exact same choreography tell a vast variety of stories, all by changing the intentions. He did the same exercise with changing intention with the eyes, such as looking at each other warmly, coldly, or having one person ignoring the other. It’s these little details that provide clarity to the story you’re telling with your dancing. Again, I was geeking out while sitting off to the side with my knees propped up. My Open routines were flashing through my head as I thought about where and how we could apply these artistic intentions.

By the end of the day, I was moving slow. My knees were sore and a little swollen. I was glad I found a spot in the parking garage close to the elevators. It was totally worth it though. Like I said, I felt rejuvenated. I wanted to get to the studio and practice, and I can’t wait until my next lesson with Teacher so we can work on these concepts together. It also gave me a little extra boost of motivation to be ready to compete at Desert Classic in July. Just being with other dancers and seeing/meeting dance friends I either only see online or at other competitions or workshops was uplifting. I don’t want to sit on the sidelines anymore!

Yes, the sidelines are a necessary part of my journey right now because obviously, my knees are still healing. But being at the workshops and just in the competition atmosphere washed off some of the depression gunk that has built up in my brain. Physical therapy has been doing wonders to clear out the scar tissue in my muscles. Being with my fellow dancers and getting my dance knowledge cup filled by some great coaches helped to clear out my mindset.

So even though I won’t be able to do much more than mark my steps, I’m off to the studio to practice. I considered just reviewing my choreo at home, but I really want to be in the studio space to keep me in that motivated mindset.

Congratulations to everyone who competed at Emerald this week! I heard it was intense, and you should be proud of yourselves, no matter where you placed.

Until next time, happy dancing!

P.S. – If you attended the Dance Congress at Emerald Ball this week, shoot me a note! I have a special offer to attendees to get The Solo Practice Guide for Ballroom Dancing, so you can keep the momentum going.