The Thespian would be proud! I went on a dance adventure this weekend! My roommate and I ventured north into Los Angeles County for an event put on by Ballroom by the Bay. The event was held in “the Valley” and so was dubbed the Valley Edition of Ballroom by the Bay. Cute. Roomie’s friend was teaching the tango class that started the party, which is how we found out about it. 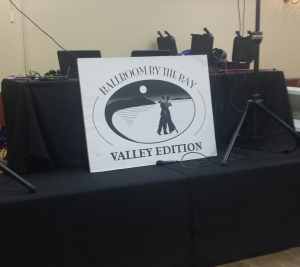 We arrived a half hour early for the group class because we weren’t sure how long it would take us to get there with traffic. The event hall was in a strip mall, like pretty much everything in Southern California, and pretty nondescript from the outside. It didn’t even look like it was open! But the door was open when we tried it so we hesitantly went in. I was immediately transported to a fire hall in Pennsylvania where I ate at many pancake suppers and attended wedding receptions. If you’re not familiar with the classic reception hall available for rent by your local fire department, think basic and inexpensive. For some reason, these halls rarely have any natural light from windows. The lighting is all from fluorescent lights in the acoustic ceiling tiles. Or from some adorably out-of-place chandeliers, as was the case this weekend. 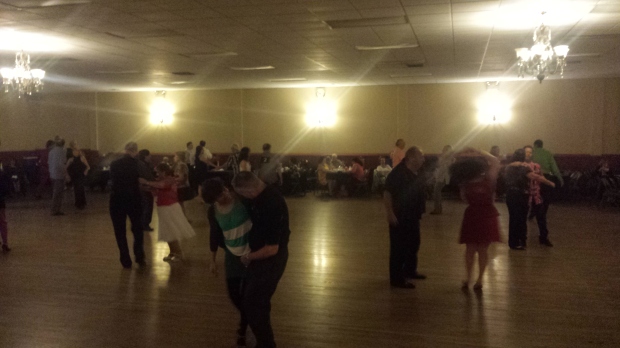 As anticipated, Roomie and I were the youngest people there, along with her friend who was teaching, by at least a decade or two. A good amount of people showed up for the tango class, probably around 20. As usual, more women than men, but not by many. I’m never sure what to expect as far as skill level, but everyone seemed to have a good idea of what they were doing! We did a tango walk into a reverse turn (which I learned is also called half of an open left box) into promenade pivots and then running steps. I was impressed that Roomie’s friend was able to teach that many non-basic steps and almost everyone kept up!

They served food after group class, just a soup and some breads, plus dessert of cake and cookies later on. The “fire hall” didn’t let me down. As plain as they appear, I’ve never had a bad meal at a reception hall. And it’s always good comfort food.

Once the general dancing started, Roomie and I were asked out on the floor for pretty much every song. That’s what happens when you’re the youngest females in the room. All of the retirement-age men want to dance with you! And there are always a few different types.

One is the flirt. He is chatty and full of compliments. You are the best dancer there, he has fallen in love with you, he’s going to steal you away. But it’s all in good fun, so it doesn’t get creepy. He doesn’t necessarily know the proper steps of the dance but if you stop trying to do the actual dance and just follow him, he’s a good enough lead that you can wing it and have fun at the same time. Nevermind that he does the same pattern of steps for every dance, be it salsa or foxtrot.

Next is the teacher. He’s not actually a teacher, but he has been dancing long enough that he considers himself a great dancer and if a move doesn’t go right, it’s because you didn’t follow his lead properly (whether that lead existed or not). But he doesn’t mind, he’ll teach you the right way. This type I can tolerate but he starts to get on my nerves after a while. I can’t “just follow” if your lead is unclear, sir, sorry. I don’t care how long you’ve been dancing.

Then there is the admirer. He comes up to you and says he saw your great posture or frame and knew you must know what you are doing and he just had to have the chance to dance with you. Because you’re special. He generally knows what he’s doing and won’t try to correct you if you mess up or don’t understand his lead. Just smile at him and laugh at your own silly mistakes and he is happy.

Finally, there is the player. He may be a couple of decades older than you, but that doesn’t mean he can’t ask for your phone number! Roomie got one of these, he wanted her phone number so he could call her when he was down in Orange County to go dancing. Sure.

The event included a jack and jill competition. For those unfamiliar, “jack and jill” means the men and women are paired up randomly. So you don’t know who your partner will be until it’s time to dance. There were cash prizes, so of course I submitted my name! It was just one dance, a tango. I was paired with a guy I hadn’t danced with at all yet, so I had no idea what to expect! We did pretty good though! I stumbled through one part, but once I knew what he was trying to lead, we were fine. And we ended up getting second place and each got $15! Woohoo! 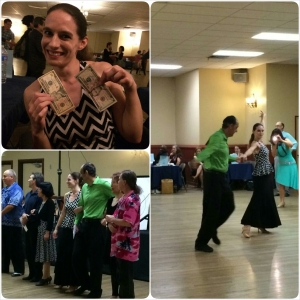 After Roomie got a marriage proposal that was mostly light-hearted (flirt type) and the phone number request that was a little too serious and bordering on creepy (player type), we decided it was time to head back south. But we had fun! It had been a while since we had been to a social dance like that and we got asked to dance so much, we felt like we even got a workout! It was definitely worth the 1.5 hour drive. And since entry only cost $14, I came out with $1 profit! Hey, I take what I can get. I also got some good practice in following silver-level patterns; pretty much everyone was leading that level. Always a nice feeling to get confirmation that I am a good dancer and follower with others besides Teacher. Unless you ask the “teacher” type I danced with, he would say I just need a little more practice. Sure.